For the last time, Veere di Wedding is not about Feminism or Women Empowerment.

This is a primarily light-hearted story about 4 protagonists, who happen to be female and their friendship. This isn't a 'Lipstick Under My Burkha' or an 'Angry Indian Goddesses.' The idea was to make an entertainer with females in the lead and in that aspect, and the makers have more or less succeeded.

This makes the vitriolic reactions all the more saddening. Grandmothers all over the country are 'ashamed.' And to be fair, that is understandable, most of them are set in their ways and it is probably asking too much to expect them to become more open-minded at this stage. However, I would request their children and grand-children to gently remind them that the Kama-Sutra and the Mahabharata were written in the same time period.

But what of the younger generation? I have come across plenty of audience reviews from men that have labelled the movie as 'crass' and 'vulgar'. It most definitely isn't any of those things. The hypocrisy is mind-boggling, for this is the same demographic that flocked to 'Grand Masti'.

Then there’s the cavalcade of responses that pose the question “So, is drinking and cursing female empowerment”? They are missing the point. The point is about choice. The characters in this movie choose to drink and curse, and they are unapologetic about it. Some women drink, some women don’t. Some women curse, some women don’t. The point the movie is trying to make is that women can choose to do what they want and not be judged for it. Do we, as a society, look down upon men who drink and curse? Nope. The point is equality. 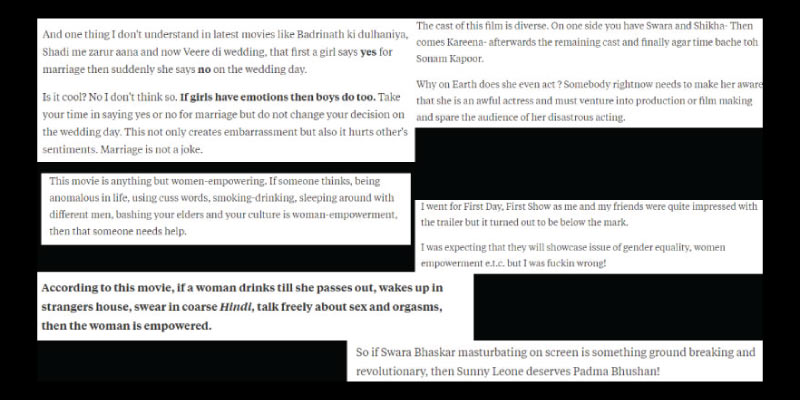 But what i dont understand is that :

Why can men drink, talk loud, party late, cuss others and have casual sex and be okay with it.

But the moment women do it we cry “they should inspire”

When men are shown doing all that nobody bats an eye but when women are doing it everyone is getting so mad at the cast, the movie makers etc. Don't even let me get started with Gangs of Wasseypur or Delhi Belly.

Drinking, cussing talking about sex is as normal and as human an activity as it could be. Asking women to be more “inspiring” instead of letting them do all the things that men can very normally do is regressive. Feminism and women empowerment is about giving women an equal right as men have.

Relax, it's just a movie.

Maybe, if there were five old men trying to get laid we would have easily shrugged it off as another trash movie. But it's always difficult with women just doing silly acts.

Did you really expect any intellectual musings or commentaries from an already masala movie like Chennai Express or Golmaal? No, it was another entertaining flick.

It focused on many things like value of family, support and understanding of partner (the way Rishab supported Kalindi on her every decision when she said yes after his proposal and when she decided to break the wedding).

It focused on how a child gets mentally disturbed due to continuous fights and arguments between their parents. (Kalindi was scared from getting married and to accept new relationship and responsibilities that's why she always ran away from getting involved into something new).

It focused that there is no need to spend lavishly on weddings and put yourself in trouble and invite thousand people whom you barely meet .

It focused on how friends become extended family and is always with you in all the phases of life.

Saying the movie was bad because they used foul language is just plain hypocrisy.

Veere Di Wedding isn’t a perfect movie, far from it. But it is another step in the right direction, and it paves the way for other writers and directors to tackle this particular genre without the fear of outright rejection. But perhaps most importantly, it has made it crystal clear to the producers that a female-led ensemble movie can be a successful venture for them.

Also Read: Veere Di Wedding Movie Review: A film that rolls its eyes at 'happily ever after'