Ranbir Kapoor and Alia Bhatt are indeed the ‘IT’ couple of tinseltown.

The two reportedly fell in love in Bulgaria where they went for the recce of the film, Brahmastra. The Kapoor family has taken to Alia in a big way leaving everyone wondering if a quick wedding is indeed on the way.

About his new relationship with Alia, Ranbir had said,

"It's really new right now, and I don't want to over speak. It needs time to breathe and it needs space. As an actor, as a person, Alia is - what's the right word? - flowing right now. When I see her work, when I see her act, even in life, what she gives is something that I'm aspiring to for myself. It's new for us, so let it cook a bit."

Right after Ranbir admitted that their relationship "is too new" to talk about, Riddhima sent Alia a bracelet, and the latter couldn't contain her happiness. And it's a well-known fact that Neetu and Alia get along like a house on fire.

Alia went for a family dinner with Ranbir, niece Samara, his mom Neetu Kapoor, and his sister Riddhima, to St Regis Hotel, Mumbai. Alia looked gorgeous as always, in a white outfit and minimal make-up.
She was clicked stepping out holding the hold of, well not Ranbir but his adorable niece, Samara. The little one is now in Mumbai and was even spotted at the Brahmastra sets.
Samara was in a white frock with silver sneakers. With a shimmering hair accessory, she looked like a little princess. Alia protectively held Samara’s hand as they walked out. Ranbir was walking behind and we could spot his aunt, Rima Jain too. Surely, the family seems to consider Alia as one of their own already. 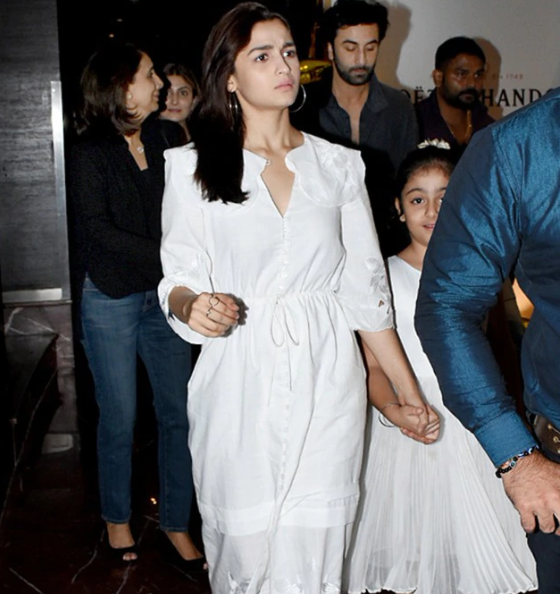 Brahmastra, which also stars Amitabh Bachchan and Mouni Roy, is being made as a fantasy trilogy, the first installment of which is slated to release in 2019.

Dhanush's 'Thiruchitrambalam' will hit the screens on July 1, 2022

Avatara Purusha: Part 1 Movie review: Film with lots of laughter and has tried to showcase an unique aspect of black magic